A hive of activity in the pigeon practice

It seems that the health problems of our pigeons this year are more serious than in previous years! We are overwhelmed by requests for help from all over the world. Especially by phone, but also via emails with pictures and videos of pigeons with problems, and of course in the clinic. It even seems that, under the influence of a number of lay writers, medical supervision has been pushed a bit into the background, with all the unpleasant consequences that this entails.

With influential pigeon fanciers around the world

In the past century (which seems longer ago than it is), there were also discussions and polemics in the various pigeon newspapers! What a luxury, we then only had about five newspapers in the Netherlands.
Prominent among them was the NP orgaan of the de Zeeuw family. In that newspaper, there happened to be writing the great supporter of the so-called “Grain and Water-theory” (Arie van den Hoek). Piet de Weerd was also a regular contributor, who was ‘coincidentally’ my brilliant father. He was more or less ahead of his time, regarding medical supervision which was invented with pharmacists, including Harrie van Helvoort from Breda and veterinarians at home and abroad. Father Piet made the Belgian racing pigeon famous in the USA, Mexico, Germany, South Africa and Asia. He also probably made the best breed ever, world famous. And there were of course the Janssens Brothers from Arendonk. These great champions were visited countless times by my father in the company of influential pigeon fanciers from all over the world. To name but a few: Erich Heinemann (former chairman of the DBV) of the top fashion group with the same name in Germany. Raymund Hermes (meat magnate), known to everyone, a phenomenon in Hamm (Sieg) and in the Saar region. Professor Anker from Kaposvar (Hungary), known from the beautiful book by Steven van Breemen (The art of breeding). Prof. Anker was preoccupied with the genetics of pigs and he even tried to breed an extra rib in a certain breed!

As a world expert in the field of racing pigeon selection, my father was regularly consulted by Anker. Along with, professor William Keeton of the famous Cornell University in Ithaca NY. In this case it concerned the pre-selection of pigeons, which Keeton used for his pioneering research into the orientation abilities of our racing pigeons. Keeton never visited the Janssens. My father visited him several times at the university in Ithaca.

I also remember Miguel Galas Lavin, a close friend of my father from Mexico City; he came to Breda regularly and he also visited the Janssens. My father and I visited Miguel in 1968, which was at the time of the Olympic Games. Miguel had a large printing firm with 600 staff, where all the tickets for the Olympic Games events were printed, which meant I could go wherever I wanted. Miguel was friends with Mexican president López Portillos and Ramírez Vázquez, president of the Mexican Olympic Committee and architect of some beautiful stadiums. Thus, I received a personal invitation from the president of the IOC, Avery Brundage, to help release the pigeons at the opening ceremony, during which Enriqueta Basilio lit the Olympic flame.

On the road with father Piet

I still remember the German fine artist Prof. Norbert Kricke, also a pigeon fanatic, who long ago made a large metal work of art, his ‘Hexenküche’ for the University of Baghdad. With father sitting next to him and me folded up in the back of the Triumph sports car, we often drove to visit famous ‘Belgians’. And not to forget Prof. Jan Bonsma, University of Pretoria, South Africa. Also a respected geneticist who bred the ‘Bonsmara’ cattle breed in South Africa. This breed is a great achievement, it is resistant to insect bites because it has been bred with a thicker skin that prevents mosquitoes and ticks from delivering their ‘loads’ of blood parasites. Bonsma was also a great pigeon fancier and a wise man. He was impressed by my father’s selection technique because this had produced good Aarden-pigeons in South Africa. The breed which Piet de Weerd had nominated as the most important ‘basic pigeons’ to Jan Aarden. The story is quite well known. Although the Steenbergs breed still dominates the very long distance!

Anyway, let’s go back to the ‘Grain and Water Theory’ of vdH (van den Hoek) and the polemic about it with Piet de Weerd, the supporter of responsible medical supervision. Every scientist who knows something about pigeons, agrees that this ‘Grain and Water-theory’ is of course nonsense. Pigeons that are in their baskets every week, with thousands of others in containers, it is logical that you’ll find ‘all’ the pathogens that exist! But then comes the real problem, because I’m repeating it for the umpteenth time: “The presence of potentially dangerous bacteria or viruses does not necessarily mean that the pigeons are sick. It takes more, such as a drop in resistance, a bad loft, bad care, etc.” With modern PCR techniques we can find 1 bacterium, so to speak, while 1000 are needed to become ill. PCR techniques are expensive.

There are also simpler tests, test kits if you like. We use those too. Unfortunately, the results are often unreliable. The routine testing of seemingly healthy pigeons is an expensive and above all pointless activity, only good for the wallets of its manufacturers! Just as the former leading University for Veterinary Medicine, namely that in Ghent (now Merelbeke) always claimed. A result of an examination is only meaningful if the germ (bacterium/virus) comes from pathologically altered tissue, part of Koch’s postulates. The pathogen should be found in unusually large amounts in the patient but not in the healthy animal. It must be possible to isolate and grow the pathogen. A laboratory animal infected with the cultured germ must contract the same disease.

All these results, and we are confronted with and consulted about them on a daily basis, unfortunately often have little value because the real problem is not analysed! The lab results from England in particular are often wrong as far as I am concerned, but they also don’t understand much about Pigeon Medicine in France and Spain. And on websites and in newsletters, especially in Belgium and the Netherlands, you will be shamelessly bombarded with complete untruths and even nonsense. 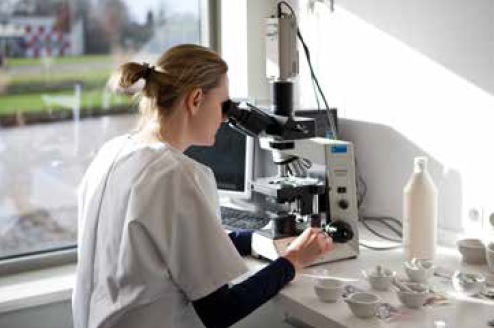 Responsible use of antibiotics

When I walked into my clinic this morning and talked to some of my staff about last night’s thunderstorm, I noticed that one of the ladies hadn’t coughed for a while and fortunately hadn’t been ill for quite some time. She answered my question as to how she managed to stay free of illness: “I’ve been taking antibiotics preventively for half a year now, 3 times a week 1 tablet and it’s going great. I’m now reducing it and in the ‘sensitive’ months I’ll build it up again, preventively, of course on the advice and prescription of my lung specialist.”
There are many more examples of responsible antibiotic use. The resistance problems are not that bad in pigeon racing. This is exaggerated, we observe this daily because we are among the pigeons like no other and do an intensive follow-up after the treatments. This gives you an enormous experience and you also see that resistance in pigeon colonies can change and disappear like snow before the sun.
Contrary to what some colleagues would have us believe!

Some Belgian colleagues are acting a bit desperately about antibiotics, but that is mainly because they can no longer work with them, at least they think that they can only work with veterinary medicines for pigeons registered in Belgium, and there are hardly any. Veterinarians are no longer allowed to prepare pharmaceutical compounds themselves in Europe either. They also don’t know the European laws and regulations very well, because for some time now there have been no pigeons in Belgium. In Belgium pigeons are either:
a. poultry or
b. birds!

If you don’t offer them for slaughter, they are just birds, and so Belgium is in line with European regulations. And we have also contributed to this. There are excellent European registered veterinary medicines for pigeons available. Also, in the Netherlands, Belgium and Germany.