A lesson in current clinical diagnostics

During this time of year (April/May) we are often consulted about specific problems with old and young birds! Whereas with the old pigeons after about four races we always have problems with the upper respiratory tract, with the young pigeons we mainly see gastrointestinal problems.

The complaint is that the pigeons returned home fine the first few weeks and flew quite well but after about four flights they weren’t responding well. Lower prize percentage, no more top prizes. Of the old birds brought to us, this is the current problem with approximately 90% of them. The upper airways are ‘irritated’ and that manifests itself in puffed feathers around the ears, rough necks (feathers not aligned nicely), often slightly discoloured noses and eyelids. At a later stage, this also means that they shed less downfeather, don’t want to spontaneously bathe any more and train less well. The pigeons get out of shape due to these ornithosis complaints of the upper airways.

If you continue to race such pigeons, their condition gets even worse, with the result that you can lose well proven pigeons during relatively easy flights.

It is therefore logical that you would treat them with suitable registered veterinary medicines to get them back into shape quickly. The problem with this so-called ‘swollen heads’ or ‘blocked nasal passage’, is much more common with cocks than hens and more common with yearlings than with older birds. This is logical because older birds have been selected for this for longer than yearlings and hens get much less stressed in baskets than cocks. 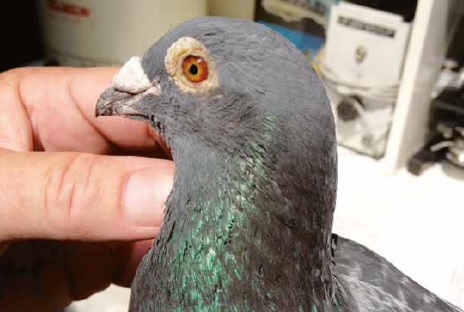 In principle, the problem is also directly proportional to the number of pigeons in the basket and the number of days (nights) in the basket. Issue of infectivity. Little has changed in fifty years on this topic and at the beginning of my career I had already been alerted to this by top fanciers such as Piet Meevissen from Meerssen and for example Mari Auwers from Lith. Great champions for many years with responsible medical supervision. Also personal friends who have fully tested some of our currently registered veterinary medicines. A short 3-day treatment is usually enough to get them back on track. And not 14 days to 3 weeks, as prescribed by the University of Ghent, for Chlamydia infection, for example. This bacterium is an important factor in this ornithosis complex, together with Mycoplasmas, Haemophilus bacteria and for example streptococcus and staphylococci. Sometimes this is also complicated with E.coli bacteria (present everywhere) and Trichomonas and Herpes.

The cold, changeable weather also plays a role in this ‘clinical picture’.
Clinically, you can also see threads of slime in the mouth, sometimes wet eyes, dry feathers, yawning, swallowing etc. It is usually not worthwhile to do laboratory research, simply because many healthy pigeons are just ‘carriers’ of the mentioned pathogens. It is only when the equilibrium is broken in specific immunity that problems arise.

We sometimes see some ornithosis complaints, but they’re not in the basket yet, so that’s not too bad. The main problem here is the gastrointestinal complaints due to Adeno-coli. About 8 years ago it was assumed that circoviruses played an important role in this, but science now tends to assume that circoviruses do nothing alarming in themselves but are always seen together with all known pigeon diseases. They become secondarily active and this is only during the first four months of the pigeon’s life. An interesting theory that I have actually been endorsing for many years. 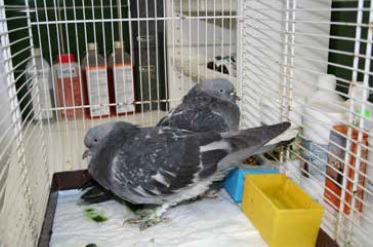 Adeno-coli syndrome has existed for almost 40 years. Nobody knows exactly why it so suddenly broke out. It most certainty has something to do with a sudden change in the intestinal flora. A change of the environment in the small intestine, as a result of stress, can cause all kinds of E.coli bacteria to suddenly change from ‘useful presence’ to ‘deadly aggressor’ in the young pigeon.
Over the space of one night, you can suddenly, the next morning, have more than 50% of the pigeons ‘sick’, vomiting, dirty green-brown, slimy droppings, at least that was the picture in the beginning, about 40 years ago.
Now it has all become milder, that is to say, it has affected far fewer pigeons, less mortality but sometimes still difficult to cure despite excellent registered veterinary medicines. If a reliable, good antibiotic does not work after four days, the pigeon fancier and veterinarian in question should seriously suspect that there is more going on than Adeno-coli! Paramyxo should be seriously considered.

I’ll give you a brief overview of the clinical differences.

Adeno-coli
Sudden vomiting and dirty, greenish slimy-watery droppings. The pigeons no longer have an appetite and are drinking little. The crop full of water that you can regularly feel with this syndrome does not mean that they are drinking a lot, no, that’s just a crop that doesn’t empty and that indicates a serious intestinal inflammation. Several youngsters get seriously ill and will die unless you intervene quickly.

Paramyxo
Paramyxo also often presents in a rapid outbreak; seriously ill, dull young who in general hardly vomit but produce dirty, green, watery(slimy) droppings and drink a lot. Mortality is quicker and far greater than with Adeno-coli. We also often see nerve symptoms at a later stage! Sometimes it is literally mopping with the tap open!

To make it even more complicated for both fancier and veterinarian, we have seen a combination of both Adeno-coli and Paramyxo regularly over the last ten years. Unfortunately, as it’s often not recognised in time, a wrong diagnosis and treatment occurs. There is a possible treatment for Paramyxo, which is immediate vaccination, even if they were already vaccinated (up to 6 weeks before). We have found that the incubation time in practice can be up to 6 weeks. This means that you can still have a PMV outbreak up to 6 weeks after the vaccination. But the motto is always: quickly re-vaccinate, so you can save a lot of pigeons.
Preferably with an aqueous vaccine, which works faster and better in these types of cases.

When the symptoms are examined properly, the veterinarian with necessary experience can make the diagnosis, from here to Timbuktu.