About pigeon shows and vaccines 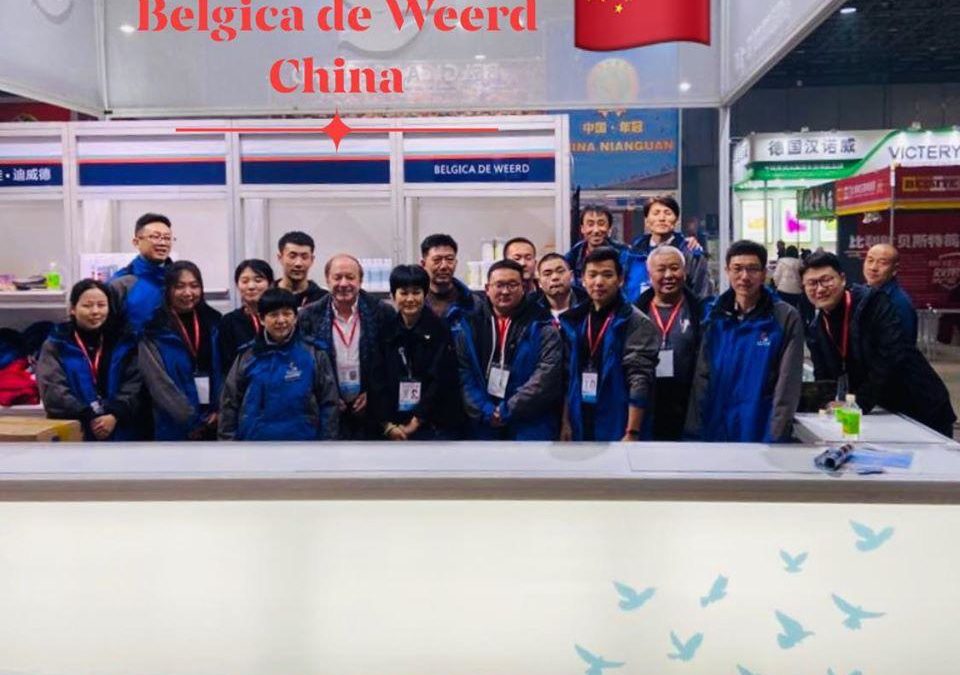 About pigeon shows and vaccines

In October, the time of the large pigeon shows and markets started again in Kassel, Germany. The weather was nice and ‘die Taubenmesse’ was well-attended, it even seemed busier to me than last year. For us, such a happening is an indicator of what to expect from 2020. The Kassel Messe was more international in nature than other years, with visitors not only from Poland, Rumania, Hungary and Yugoslavia, but also from the Netherlands, Belgium and the UK.

After Kassel, we were also present with a large stand in China, at the so-called Langfang show. Langfang is a city southeast of Beijing, halfway to Tianjin. This is the centre of pigeon racing in China. Beijing ranks first, while Tianjin takes second place. There are tens of thousands of pigeon fanciers, perhaps not surprisingly given how huge these cities are. Beijing has 30 million inhabitants and Tianjin approximately 14 million.
I have been visiting this marvellous country with its 1.3 billion inhabitants and 5000 year old civilization for over twenty years. Back then, I imagine that in Europe we still walked around in bear hides.
In China, there is still order, authority and discipline, which is needed to keep its approximately 50 ethnicities together. Twenty years ago, around the Tiananmen Square in the old Hutongs (classic Chinese residential districts), I already observed how the children arrived home from school in their uniforms and started doing their homework straight away. At that point I said to my family: “China is going to conquer the world, there is no European remedy against this mentality.”
The prediction proved rather accurate, because nowadays, China is a very important player on the world stage, as you know.

The show was held on the 23rd and 24th of November 2019, and we were really lucky with the weather! A slight frost, a bit foggy in the morning but a clear sky for the rest of the day with a temperature of 6 °C, hardly any air pollution and a pleasant breeze from the North. In 2017, the snow lay thick everywhere and you could hardly see anything because of the dense fog, as a result of which the show attracted less visitors. According to the organisation, headed by Dr. Wang, the show had approximately 30,000 visitors this year. The hall was further expanded this year and next year, everything will be even bigger. The demand for stands has increased considerably and Sunday afternoon, many people approached the organisation to already reserve a place for next year. Since we have practically the biggest stand of the show, we do not need to make a separate reservation. We attended with 18 employees, most of whom work in our domestic animal and pigeon clinic in Beijing. We had a few very busy days and the team performed very well. 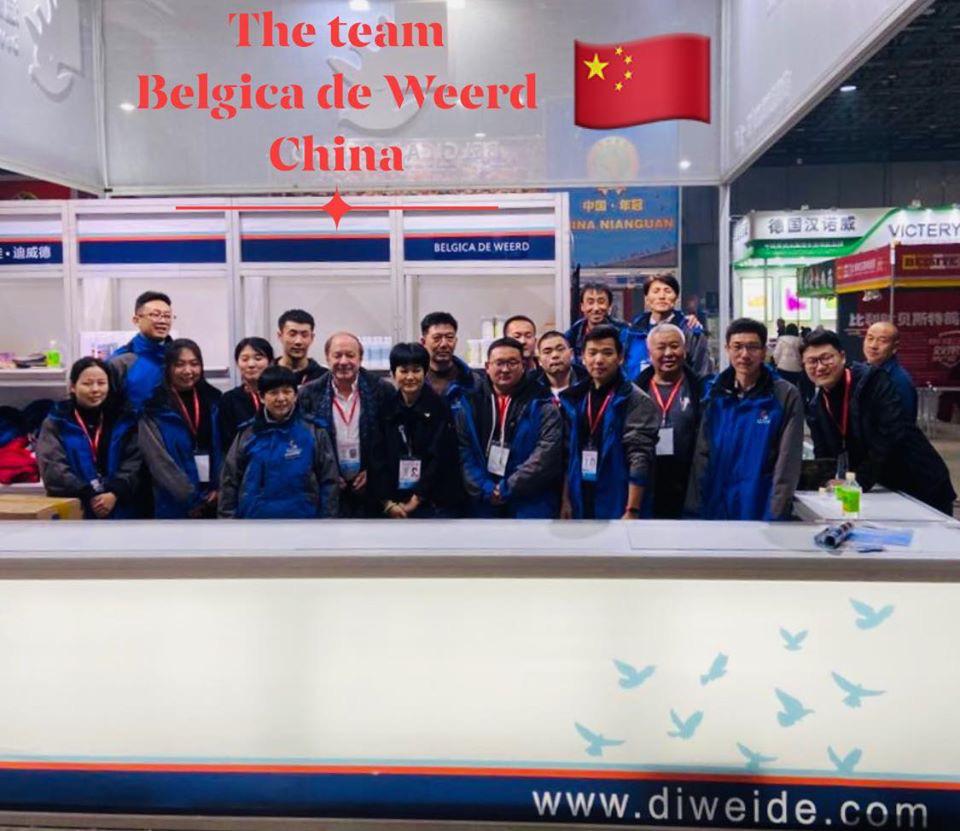 When I was in China for the first time, approximately 22 years ago, I visited the One Loft Race of the Eijerkamp family in Beijing. Nice lofts and a wonderful initiative, and already so long ago. The first Chinese I met there was Mr. Huang Jian, he took pictures upon our arrival and during the visit to the lofts.
By now, Huang Jian has become a good friend and is a big shot in the Chinese pigeon racing world; he is also on the organising committee of the show and closely involved in the CRPA (Chinese Racing Pigeon Association). He gave me the following information, in outline, on the evolution of pigeon racing in China:

Naturally, this makes China by far the largest pigeon country in the world. They still import a lot of pigeons from Europe; however, transport has become much more difficult and expensive in the past few years! The prices to be won are enormous as well. We must not forget that thanks to the Chinese, pigeon racing in Europe is more stable. 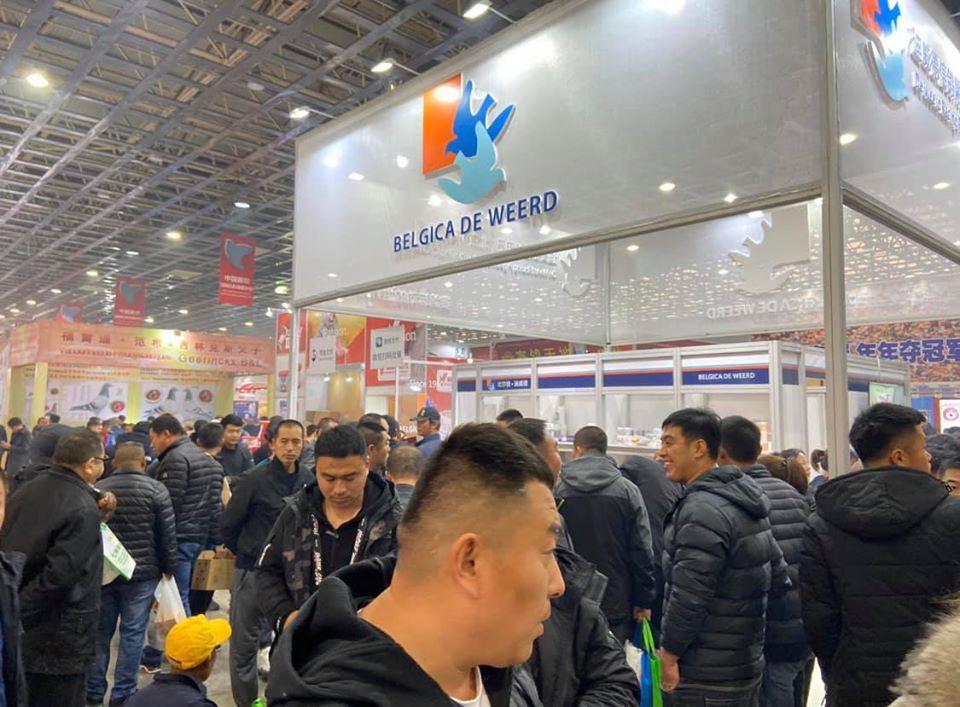 Lastly, I would like to explain something about several vaccines coming to us from some Eastern European countries. These are vaccines that are supposed to provide protection against Adeno/Coli/Herpes/PMV.
I have already tested such vaccines several times in the past. Even though they usually create immunity against PMV, in my opinion they fail to do so against Herpes/Adeno/Coli. You may create a vaccine, which is the technology to inactivate certain ‘pathogens’ (proteins), and add some excipients! But whether they actually have the effect that is promised is quite a different story!
Since with a number of ‘diseases’, like Adeno-Coli and Herpes, the pathogens are latently present, such a vaccine hardly has any effect.

As for Herpes, the Veterinary Faculty of Gent University (Merelbeke) has already officially published this a number of years ago! Vaccination is pointless which also became clear from all our tests!
And yet, there are always veterinarians who want to vaccinate without considering the question whether the vaccine delivers on its promise (to provide protection).

It is impossible to create an effective vaccine against coli. Of course you can make a vaccine, but it will not be effective; there are quite simply too many types of E.Coli and not long ago, I saw an ‘eye opener‘ on television. The programme was about the value of the human vaccine against influenza (the flu). Various worldwide renowned scientists gave their opinion, among whom Prof. dr. R. Coutinho. He simply argued that the flu vaccine given each year to many people in the Netherlands probably does not do anything to avoid influenza, which is not only due by the fact that new variants of the influenza virus regularly crop up.
He even said that the effect of these vaccines has never been properly examined. When asked why that vaccine was nevertheless administered so many times, his answer in essence was that it was a revenue model for the industry and for the doctors administering the vaccines.
I was flabbergasted! So that is how the world works (sometimes).
And you must bear in mind that if you do not suffer from disease X after having been vaccinated against it, that does not mean that the vaccine worked properly, because many would not have gotten disease X even without the vaccine.

NB: I am not against vaccination at all, but it has to be effective. And with pigeons, only the PMV vaccine is highly effective when administered in time. The vaccine against smallpox is reasonably effective, but all other vaccines for pigeons are mostly an expensive illusion to ease your conscience.