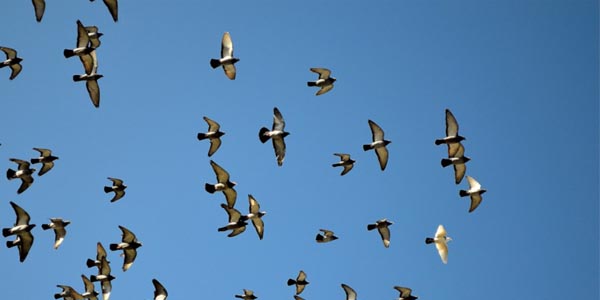 Because I am astonished to read the nonsense that some writers dare to preach about pigeon medicine and medical support, while not being hindered by any sign of knowledge in the field, I see it as my duty to guide readers and younger veterinarians through a maze of ingrained, incorrect notions and misinterpretations.

In no particular order, I list a number of matters that irritate me immensely owing to persistent inaccuracies.

“Are pigeons flying crooked in the racing season the consequence of muscle damage”??
Answer: “No!!”

It is not a muscle problem, but a problem of the shoulder joint. I researched and published this about 35 years ago. Almost without exception, it concerns minor damage (injuries) to the tendons and ligaments and the cartilage of the shoulder joint. Several years ago, these facts were confirmed by scientific research in Germany, and they were published in “Die Brieftaube” among others.
For many years, the accepted idea was that it was a problem that was caused by streptococci. They were thought to cause muscle inflammation that could also be clearly seen through the skin next to the sternum. That was based on research published by the University of Gent (Faculty of Veterinary Medicine).

Well then, I, a veterinarian specialised in pigeon veterinary medicine, can tell you that, in no less than 45 years, I only found a streptococcus infection in the pectoral muscle on about 5 occasions!
Now that that fairy tale has been definitively banished to the land of fables, a new ‘theory’ has appeared on the horizon: now a large number of these pigeons flying crooked are caused by muscle injuries…

Now, forget that dear reader; you know yourself how pigeons admirably and gracefully return home with a flight-induced injury to the sternum or muscles without flying crooked! So, forget streptococcus and muscle injuries as the cause of crooked flying and remember, in particular, that shoulder joint problems occur in varying severities! And that means that by less serious damage the injury will heal on its own accord by resting the pigeon for about 10 days, but that also means that a pigeon with more serious damage will never fully recover. In other words: the problem will keep returning if the shoulder is overused. It also means that all the well-intended treatments are actually pointless. The only thing that can help are the so-called NSAIDs (painkillers and anti-inflammatory drugs), but they are on the doping list!

The most extreme case of such a shoulder injury is total luxation (dislocation) of the joint where the wing in question sticks up on the tail on the broken side. Such pigeons will occasionally return home on foot. Of course, magnesium supplements will have no positive effect whatsoever on the healing process.

X-ray caption: The degree of crooked flying is dependent on the severity of the injury relative to a normal joint (see green arrow) and total luxation (see red arrow)

Herpes type I and type II

Another misunderstanding: “Herpes is a big problem in our pigeons, especially in the racing season”!?
Answer: “No!!”
Herpes is a virus that is latently present in many pigeons, i.e. our pigeons are ‘carriers’ and do not get sick from it. But first, I would like to make an important distinction between Herpes type I and type II, as I did previously 35 years ago.

Type I is present in both old and young pigeons and it doesn’t actually do anything significant.
However, type II we only see in young pigeons and they then subsequently die from it. They exhibit very specific symptoms (pathognomonic) and once you have seen it, you never forget it! 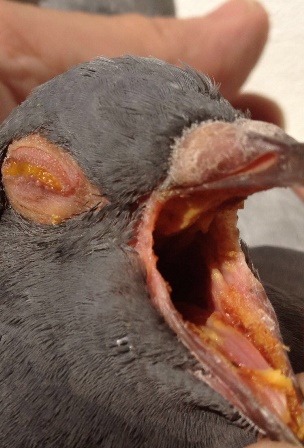 We see pigeons aged just 6 weeks getting ‘sick’! Cramped up, tremors, bloated, not eating, not drinking and green slimy droppings. The pigeons get a serious upper and lower eyelid infection in both eyes, which is accompanied by puss and crust formation (eyes that are glued shut). In addition, yellow loose skin on the mucous membranes of the mouth and pharynx; the mucous membranes there are bright red and bleed easily. The poor animals die after approximately 5 days; they are irretrievably lost. If a veterinarian coincidently finds trichomonas while inspecting the throat swab samples and then presupposes that the diagnosis is Trichomonas, then he is seriously mistaken!! Unfortunately, this happens a lot.
Of course, the right diagnosis is Herpes type II.

During all our research, it also became apparent to me that, if a pigeon dies, the nest mate also very often dies, but one should note this can take up to 6 weeks, which, to me, would imply that the youngsters are infected by their parents, without the parents initially experiencing the slightest problem by the way.

Luckily, Herpes II is not extremely infectious: it spreads slowly, from one pigeon to the next. Some ‘lofts’ have this problem in their youngsters every year. So, we looked for therapies from the very beginning. And we found one thing that was very effective in stopping its spread and that was an antibiotic and not a vaccine, because they are ineffective against Herpes.
How it is possible that this antibiotic works as such an effective preventative cure is a mystery to me. In practice, we use this antibiotic on the young pigeons throughout the entire loft and the sickness spreads no further.

When in the beginning I sent this kind of sick pigeon to the poultry laboratory (more than 35 years’ ago), nothing was initially found! Later, with improved techniques, they found Herpes! For us pigeon specialists, being able to cure pigeons is the most important thing! What label the scientists subsequently stick on it interests me less, and anyway they often change their minds. That is also a very interesting phenomenon by the way and I can provide good examples!

So, now something about the ornithosis problems in the season. As you know from my previous articles, this is at any rate a kind of global disease in young pigeons, that is to say that, at any given moment, all young pigeons are affected by it, especially when they start to moult their tiny feathers and later during the racing season.
The symptoms are well-known. Ranging from leaking, smacking, head scratching, chaffing and a watery discharge to a ‘one eye cold’ and, nowadays, also a ‘two eyes cold’. The latter was especially prominent about three years ago! It is very infectious and old pigeons can contract it too, especially when there is ‘high infection pressure’ and in the autumn!
A number of treatments are administered: all kinds of eyedrops and the necessary antibiotics are added to drinking water, which usually helps quite well. But we also inject the pigeons if the ornithosis is more persistent and involves swollen eyelids, irrespective of whether it is accompanied by snot or not, and the problem then usually clears up quite quickly within just a few days. It is important to note that medicinal products such as Linco-Spectin and the antibiotic streptomycin (previously available in Germany under the name of CX60) do not work well! No, there are much better medicines that can quickly cure the illness, thereby allowing the pigeons to recover quickly and get back into shape.

Circovirus is a similarly controversial subject! For this, it has also become apparent that it does not play such a big role in young pigeons as many scientists initially had thought. It appears that many of our young pigeons are carriers unaffected by problems.
I still remember the panic when that virus was first found in pigeons. The storm has since subsided and you hardly hear anything about circovirus now, but the clinical symptoms and our own research had made this clear to us from the very beginning!

I hope that I have created more clarity in the jumble of (dis)information that you may read in articles, but also on the internet!