Year in, year out, we are consulted during the breeding period because hens (of course) are laying irregularly or not at all. The latter refers to hens that lay very late, for example more than 2.5 weeks after pairing or produce abnormal eggs such as one or two soft-shelled eggs, sometimes eggs with weak, too thin shells and often shells with calcium lumps.

Nearly all these problems indicate fallopian tube inflammation (pigeons do not have a uterus, but a fallopian tube). It is often assumed that there is a lack of calcium, but I disagree with that, as so often! A simple treatment with the right antibiotic or a combination of a few antibiotics gives, in more than 80% of the cases, normal eggs without extra calcium being added.
The fallopian tube is in open connection with the outside world through the cloaca, but the cloaca is also connected with the intestine because it flows into it. The fallopian tube leads into the left side of the cloaca and then 2 more channels end up in it, namely the ureteral outlets.
The dorsal wall (top wall) of the cloaca also contains the so-called bursa of Fabricius. This is the lymphoid organ that plays a role in building up the immunity of the pigeon. With age, the organ goes into regression, slightly similar to the thymus in mammals. In calves this organ is also called the ‘thymus’.

You can imagine that the cloaca is normally teeming with bacteria. Usually these are benign bacteria, but there are also malignant ones! And if ‘enough’ of the latter are present, it can be a reason for inflammations in the cloacal region.
It is commonly known that circoviruses can infect the Fabricius’ bursa. Consequently, it may not work as well as it should and therefore a less good general resistance is built up. About 8 years ago, quite a few colleagues became very nervous about this circovirus. It could have been the cause of all kinds of calamities, such as the death of squabs and the ‘adeno-coli’ outbreaks. I didn’t really believe it, after all I had 40 years of experience with pigeons in my clinic and had seen no new diseases appear in all those years except Paramyxo  (1983).
The scientists found that in a large percentage of young pigeons circoviruses were detectable in the bursa and that in many cases there were no medical problems or none were arising.
Of course, it is possible that the suppression of general resistance (immunosuppression) may cause some simpler juvenile diseases such as coli, but circoviruses are not the primary cause. Sometimes ‘breakthroughs’ by PMV vaccinations are also attributed to circoviruses. I rather believe it is due to vaccinations made during the incubation period, up to 6 weeks in the case of PMV, or by using ‘wrong’ vaccinations.  That means expired, not well stored, or not well injected etc.

Other infections can ‘ascend’ from the cloaca to the fallopian tube in particular.
Many of the laying problems are caused by these ‘ascending’ infections from the intestine, via the cloaca, to the mouth of the fallopian tube. Very often it concerns E-coli infections, sometimes paratyphus, sometimes streptococci and others. In all cases, we treat with targeted antibiotics which has become a routine treatment.

Hens that can no longer stand on their legs after laying may have developed fallopian tube infection after laying. Occasionally we also see a calcium deficiency as a cause even while normal eggs were being produced. If the calcium level in the blood drops too much, they become paralysed, as it were.
Hens that don’t lay (any more) are a special problem! If they are too old, they don’t produce follicles anymore, so the ovary is empty. But it may also be that they are no longer ovulating, so there will be no ovulation. This can be due to a wrong hormonal balance, but sometimes there is no ovulation due to an infection of the fallopian tube.

Paratyphus infections are notorious for causing sterility in hens, but also in cocks by the way!

Another cause of laying problems, are pigeons that are too fat. Hens with a so-called ‘thick bottom’ = thick abdomen with open vent bones. In a number of cases there is so much fat in the abdomen that it doesn’t disappear even after a long diet. So, we therefore need to surgically remove it and it is sometimes unbelievable that we can get a cup of fat out of there, see picture. Success after such a fat operation is nearly always assured.

A good diagnosis is of the utmost importance and that is again a matter of experience. 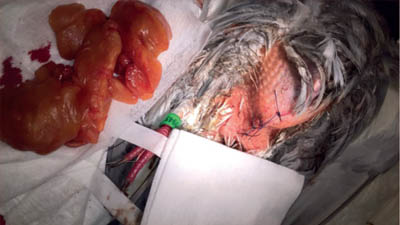 ← A lesson in current clinical diagnostics Aspergillosis in pigeons →